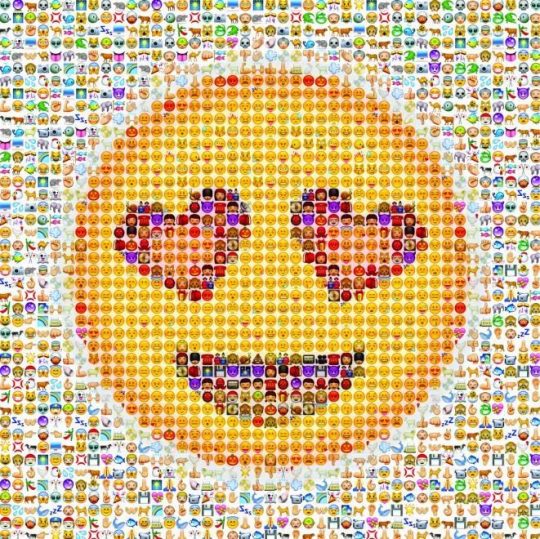 Remember the song “Put on a Happy Face?” With the advent of emojis, that song takes on a whole new meaning!

Beginning in 1999, the first 176 emojis were created. They included a sun, umbrella, soccer ball and car. According to the Museum of Modern Art, the artist was Shigetaka Kurita, who worked at NTT DoCoMo, a telecommunications company in Japan. It was when the technology was developed to support emojis on cell phones that they really became popular.

Mobile phone companies came on board when they realized that emojis were the wave of the future. Between 2011-2013, these companies created keyboards on their mobile devices to support emojis. Today, many emojis are used more often than the actual corresponding word. This phenomenon is called “emojification” and they pop up everywhere. We see emojis on t-shirts, pillows, coffee mugs and more. This popularity is only increasing as the use of emojis in our everyday communication evolves. In 2018, on Facebook messenger, over 900 million emojis were sent every day without text, according to Facebook.

1. Use emojis only when emailing people with whom you already have an established (and mutually respectful) business-email relationship. Examples include: co-workers, bosses and vendors. Emojis may be more acceptable to millennials and younger colleagues.

2. Use them very sparingly. One smiley face is okay, but not five. For example: Congratulations on reaching your team’s fundraising goal! (insert one emoji). In a thank-you email – Hi, Bill, Thanks so much for bringing bagels to the staff meeting this morning! It was so thoughtful and kind of you, and enjoyed by all! (insert one emoji)

3. Do not use emojis with prospective clients, in a “thank you for the interview” email or with anyone you are emailing for the first time. It can diminish the perception of your professionalism.

4. Do not use a smiley-face emoji to “mend” a previously sent email that may have been ill advised or to help “repair” a strained or broken business relationship with the recipient.

5. When emailing from smartphones with their endless assortment of emojis, select emojis with clear meaning, such as the variety of happy faces. Avoid anything that may be misconstrued by the recipient (smileys blowing a kiss, hearts) or emojis that may offend in other cultures such as the thumbs up and OK sign, since you never know who will forward the email.

An Office Team survey found that 39% of senior managers think it is unprofessional to include emojis in work communications. Their opinions could ruin your reputation as a qualified expert, according to a study published in Social Psychological and Personality Science.

According to Andrea Lehr, Brand-Relationship Strategist (@ Fractl), “even if emojis might be appropriate in the moment, they don’t always work as intended. There is no universal agreement on what specific emojis represent. Emojis are a newer form of communication, so if your recipient is older, an emoji can make you seem less competent simply because your recipient was expecting a more traditional correspondence.”

Sammi Caramela, Staff Writer (@ Business.com and Business News Daily), observes that “despite these concerns, many employees still use emojis at work. Not only are millennials making up a large percentage of the workforce, there is a widespread adoption of collaborative office tools that promote casual work interactions. Whether you should use emojis at work depends on context. If your workplace is informal, emojis are likely more acceptable, particularly if your co-workers use them frequently. Do not use emojis with people you do not know very well. Be careful when messaging your boss, and particularly with customers. If you do not have a comfortable relationship with someone, it is best to avoid something that could potentially turn them away.”

If you receive an email from an unhappy employee with a serious complaint or issue, absolutely do not use emojis. When someone is not sure how to react in a certain situation, wait to gauge the actions of others and respond in a similar fashion. That is a good policy to follow when online. When in doubt, wait and follow the lead of your co-workers.

Aidan, Staff Writer (@ Tsoost), relates “if your business doesn’t currently use emojis in its marketing efforts, you may wonder where the value lies. What is the point in adding doodles to a perfectly formed sentence or paragraph? Research shows that the most popular emojis have a genuine semantic meaning to readers, just like words themselves. For example, two women standing side by side with bunny ears has been decoded as sisters, sisters for life, best friends and years of friendship. Emojis have an emotional effect on readers, over and above that of even the most powerful words.” Aiden cites the following examples: looking at a smiley face online can have an emotional effect on a person similar to looking at a smiling face in real life:

• Zazzle Media found that using emojis in Facebook and Twitter status-updates has been shown to make those updates more compelling. Facebook posts including an emoji had a 57% higher like rate, a 33% higher comment rate and a 33% greater share rate than posts without emojis. Emojis have been shown to be especially effective in Instagram bios and calls to action and a particularly effective tool when used in the comments section of Instagram.

• Lean Plum, a mobile marketing platform, discovered that adding emojis to push notifications increased “opens” by 85%. Emojis also have a role to play in apps, especially when it comes to push-notifications connected to those apps.

• Rene Kulka, email-marketing evangelist, discovered that open-rates for gmail emails increased by 20% when she included emojis at the start of the subject line.

• My Clever Agency, found that 56 % of brands saw an increase in open-rates when email subject-lines included emojis.

• Chevrolet released a statement in 2015 through social media that was written entirely in emojis. Their aim was to come across as fun and irreverent to their audience and the campaign was successful in producing 18,132 posts, with most positive towards the stunt.

• McDonald’s used a series of tweets that used emojis to tell stories about how their food is great. This series included a tweet full of repeated red cars and roadwork signals followed by a crying face. Followed by a McDonald’s logo and a happy face.

• Disney jumped on the emojis bandwagon for the launch of its film Star Wars — The Force Awakens. Disney created a collection of hashtag-generated emojis for characters like C3PO and BB8.”

What is clear is that emojis are now a permanent force in our process of communication. For sure, our attitude must be “put on a happy face!” ☺ ☺