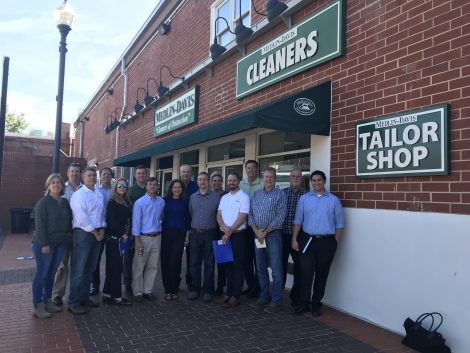 The Tuchman Advisory Group held an informative and very successful meeting at Medlin-Davis Cleaners in Raleigh, North Carolina. Mack Davis, former owner of Medlin-Davis Cleaners, which was started by his father in 1948, sold half his company to Brett Allen, and the other half to David Makepeace. Together they agree on items like advertising, pricing and logo design. Otherwise, they run their own companies separately. They have a combined total of 12 stores and 6 routes. We visited numerous Medlin-Davis Cleaners locations during our visit. Brother’s Cleaners, a friendly rival gave us a tour of their recently rebuilt state-of–the-art operation. We had lunch at the home of David and Lee Makepeace in their beautiful garden. Our final stop was at New Hope Laundromat owned by David Makepeace.

In addition, each T.A.G. member gave a presentation to update everyone on his or her individual company. Other topics addressed during the meeting included; a critique of the Medlin-Davis Cleaners operations, financial comparisons and pricing. We had a guest speaker whose informative and timely talk was entitled “Health Insurance Options for Small Employers.” We had dinner Friday night at the famous Angus Barn Restaurant. Our hosts organized a beer tasting, which added to our meeting’s festivities.

The highlight of our meeting was welcoming two new members to the Tuchman Advisory Group:  Ed Pizzarello and Michael Poeschl with Revolution Cleaners in Denver, Colorado; and Richard Thum and Sharlene Thum with Five Star Cleaners in San Antonio, Texas.