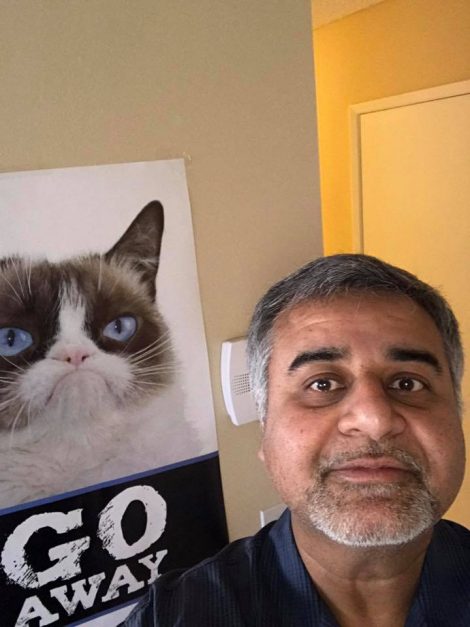 They say if you have something that needs to be done, give it to someone whose plate is full and it will get done!

I have evidence of this. If you need something done, give it to Ray Rangwala. Ray is the owner operator of Esteem Cleaners and CRDN, Pasadena, California. Ray is on the Board of the California Cleaners Association and the So Cal Cleaners Association. He is also a member of the Glendale Sunrise Rotary Club. He has a family and his business is full of everyday problems and then some! Yet he is always willing to lend a hand where needed.

Ray is the Chairperson of So Cal Cleaners “Coats for Kids.” He is also active in supporting Three Amigos Orphanage Foundation which is located near Ensenada, Baja, California. You will find him visiting this location at least 4 times a year, bringing and buying supplies as well as participating in taking the kids on outings! He is also not afraid to pick up a hammer and help with any ongoing project there is. He is always encouraging others to join him on these visits.

So I was not surprised to witness his partipcation in his newest venture: Field Of Honor And Gratitude. “I try to help where I can,” Ray states, seemly embarrassed about being asked about himself. Field Of Honor And Gratitude is a project sponsored by the Glendale Sunrise Rotary Club.” This is the first time we have tried this project”, Ray said. “Several Rotary Clubs have done this and it was a success”

Forest Lawn Memorial Park in Glendale, California and the Glendale Sunrise Rotary Club are hosting this event. The event will feature 1000 flags, firmly anchored, honoring veterans, military personnel, first responders, community leaders and any hero of your choice. The hero can be alive or deceased. For $50, you could purchase a flag (3’x5’) on an 8’ pole. A tag would be attached to the flag you purchased and you would be provided with a grid indicating where your flag is located. Obviously, they are looking for sponsors that will purchase several flags and there are various packages of sponsorship that could be bought. At this time, it appears all 1000 flags will be bought.

Ray volunteered his warehouse as an “assembly plant” to put the flags together. So on May 6th, he drove to his warehouse to open the doors for the volunteers who were assembling the flags and THEN he continued on down to Orange County where the California Cleaners Association was having their Board meeting. This was on saturday morning! Volunteers from the Rotary Club, Boy Scouts and community members helped assemble the flags.

Ray loaded his vans and broughtthe flags to Forest Lawn Cemetery in Glendale, California. There, two days before the event, volunteers pound metal stakes into the ground in order to support the flags. The St. Francis High School Golden Knights Football team, among other volunteers, including Ray, performed this task.

The community event started on May 26th at 9:00 a.m. There was an opening ceremony, during which the Glendale Fire Department presented the colors, singing of the national anthem and welcoming of the community into the property. What a powerful event! This continued until the end of May. We all have similar celebrations in our communities. This is just a reminder how important it is to attend these ceremonies in memory of your loved ones.

Volunteering is so important. Ray takes this to the maximum. He has such a big heart and it is hard for him to say no. He has been known to help drycleaners so many times. The organizations he is involved with are so fortunate to have him a member of their group. He makes decisions based on his heart and sometimes his food orders are as large as his heart!

If you see Ray, shake his hand or give him a hug, he is a shining example of our industry! And he likes cats!