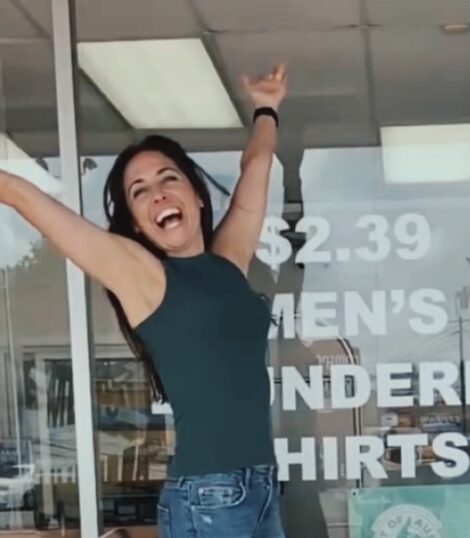 Current Position: Lucindia Osbourn works for Rick’s Cleaners and Ian’s Dry Cleaning and Laundry Delivery. Both establishments reside in Austin, Texas. Though Osbourn has no official title, the position was custom created for her. At a minimum, she focuses on sales, marketing, social media, front office and customer service support.

The Businesses: Rick’s Cleaners has been in business for over 34 years whose owner is second-generation dry cleaner Ian Noble, who purchased the company from his dad in 2016. With 14 locations, Rick’s Cleaners is more than capable of meeting the garment care needs of an Austin metro area with more than 2 million people. They provide dry cleaning, laundry, wash/dry fold, specialty cleaning for household items, leathers, wedding dress preservation and water resolution services.

Ian’s Dry Cleaning and Laundry Delivery is the sister company to Rick’s Cleaners and was established in 2018. Offering free pick up and delivery to their vast and growing clientele of residential, hotel and corporate accounts is a consistent and constant mainstay of Ian’s Dry Cleaning and Laundry Delivery. “The need for a pickup and delivery service in this growing area became evident, so we launched this company three years ago,” said Osbourn. “With Ian’s specifically, our route has tripled in the last three years.”

Starts At the Top: “You can’t have a great team unless you have a great leader,” Osbourn said of Noble. “Ian embodies what it means to be a leader because he has the rational thinking, and he’s the numbers guy.”

Osbourn also noted that Noble had practices, principles and systems before the global pandemic arrived that served his companies well through these unprecedented times. She quickly points out that his foresight and visionary leadership helped Rick’s and Ian’s weather the storm and come out stronger on the other side.

Daddy’s Girl: Wonderful childhood memories abound when Osbourn reminisces about her early and formative years. When she ponders explicitly her passion for business and where her entrepreneurial spirit originated, she remembers moments growing up between the ages of 7-12, spent with her father, Dean. Whether riding along with him to meet a business contact, working in his shop and observing his interaction with customers, or learning phone etiquette, she gleaned what small business is all about from dad. “I realize that whether he realized it or not, he was showing me how rewarding all of that was,” Osbourn fondly recalled. “In those moments, I learned that every day of your life could be satisfying and rewarding as long as you are doing something you enjoy alongside people that you enjoy.”

Go West Young Gal: A native Texan, Osbourn grew up in Bryan–College Station. When Osbourn was 14, her mother passed away. To be closer to dad’s family, father and daughter relocated to Austin. She graduated from The University of Texas at Austin, where she majored in government and minored in history. “So boring, so boring, nothing exciting at all,” Osbourn deadpanned about her academic pursuits as a Longhorn (hook ‘em, horns). After that, she went to St. Mary’s University in San Antonio, where she got her law degree.

Pre-Dry Cleaning: Osbourn’s entrepreneurial ambitions were on full display before entering the garment care industry. With a general contractor’s license under her belt, she owned a construction company while also building a career as a realtor.

Content With the Destination: When Osbourn first started working at Rick’s Cleaners six years ago, it was during a massive shift in her life. “I was leaving owning my own business and a budding real estate career to work for someone else,” recalled Osbourn. “Little did I know that it was right where I was supposed to be.”

Essential Business: “This business is tough, but I encourage all owners out there to be encouraged,” said Osbourn. “The service we provide to our communities is so important. We are an integral part of our communities.”

Team Player: “There have been so many challenges and changes over the years, but I can say 100% that I truly love this business,” Osbourn emphatically stated! “Working with Ian and our executive team daily is so rewarding and seeing our whole team succeed on a daily basis is incredible.”

Management Philosophy: “I have a balance of mind and heart, but I believe I lead with my heart,” said Osbourn of her leadership style. “I try to lead by example, thinking about the whole person; not just about the role they are serving or their capacity in the company and how it benefits the bottom line.” She describes it as a servant-leadership style with an outward focus. “It’s about how I can best serve them and not just about how they can serve the company.”

Industry Forecasting: Osbourn identified three key areas where owners and operators need to shift their focus to survive in the years ahead. They are washables, wash and fold and automation.

Osbourn noted that the ability to wet clean and have a robust wash and fold system would help overcome the trend of washable garments dwarfing “dry clean only” clothing. She has noticed many customers sending in items such as jeans, golf polos and t-shirts.

Automation is another factor that needs reckoning. “Staffing troubles may lead to alternative ways to serve your customer’s needs, such as kiosk-based applications,” Osbourn said. “Production saving measures such as auto-baggers and automated assembly may see a surge.”

Off the Clock: Osbourn volunteers her gifts and talents with the Junior League of Austin in her spare time.

She enjoys hiking, yoga, paddle boarding and traveling. She has visited the world over and many places too numerous to mention, yet there remains a location in her sights. “I’ve been lucky enough to go all over Europe and blessed to have been to many places,” Osbourn said of her extensive excursions. “I’ve always wanted to go to Morocco, so that’s on my bucket list.”

Personal: Osbourn, 42, lives in Austin and has two sons, Phoenix and Creedon (ages 13 and 8)