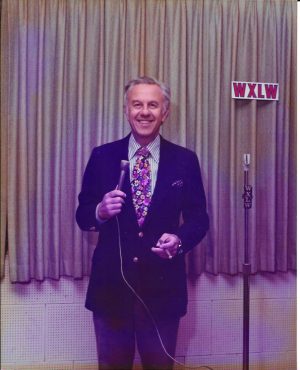 Sidney (Sid) Tuchman passed away peacefully at his San Francisco home on January 7, 2017, at age 92. He was born in Indianapolis, Indiana until 1988 when he and his wife Charlene began splitting their time between Indiana and San Francisco.

Erudite and witty, Sid was a true sweetheart of a man who will be long remembered for simply being a remarkable, one-of-a kind. He made each and every person he met feel special because he knew how to listen and to connect from the heart. He dressed with great flair and in only the finest clothes. He loved to gather friends and family around his Steinway grand piano to play and sing Broadway show tunes and had an infectious smile on his face every day of his life. It felt great just to be around him.

Sid grew up in a home with his parents, who emigrated from Poland in the early 1900s, and four siblings. As the youngest in the family, he was his mother’s favorite – or so he thought. His favorite childhood memory was of his mother waiting for him every single day on the front stoop of their home as he returned from school.

In 1943, Sid served in the United States Army during World War II. After receiving specialized training, he was assigned to the signal corps as a cryptologist in Oahu, Hawaii. His chief responsibility was to translate and break secret enemy codes.

Sid Tuchman met his wife, Charlene, on a blind date one Saturday, and they were engaged a week later. This past May, they celebrated 61 years of happiness together and raised three children each of whom are happily married and together have seven grandchildren. He loved to vacation with his entire clan and particularly enjoyed the Tuchman Family Olympics when grandparents, parents and grandchildren separate into teams to compete in various games.

Although Sid felt his greatest accomplishment was his family, he also was a proud businessman. He built Tuchman Cleaners from his father’s one-room tailor shop into Tuchman Cleaners, which became a household name in Indianapolis. Samuel Tuchman, a master tailor from Poland started Tuchman Cleaners as a way to diversify from tailoring in 1940. He employed a route driver, a presser and a counter person and sent cleaning to a wholesaler. In those days, dry cleaning had to be done using a flammable solvent requiring fireproof facilities. But in 1941, a new cleaning process using a non-flammable solvent – carbon tetrachloride – enabled Sam to buy his own equipment and operate in his own facility. Sid was only 16 years old and “carbon tet” as it was called, helped begin his dry cleaning career. Years later, Sid found that carbon tet not only cleaned clothes but it had removed his fingerprints too!

When World War II ended, Sid moved to Hollywood to pursue an acting career. That didn’t last long and Sid returned to Indianapolis to build Tuchman Cleaners. Sid began by going to many neighborhoods in Indianapolis to build routes. Over the years, Sid became president of the company. Although the business was growing, it was not growing profitably. Sid took accounting courses at night to understand modern accounting methods, which led to a unique Profit and Loss statement for Tuchman Cleaners.

Tuchman Cleaners grew into one of the largest cleaning organizations in America with 35 operating plants and stores, an industrial uniform plant and a suede and leather service covering five states. Tuchman’s introduced a Bridal Preservation Service and made available a deluxe French Room Service for special garments and furs. Tuchman Cleaners was named the Best Dry Cleaner in Indianapolis for 15 straight years. In the late 1960s polyester leisure suits, shirts and pants depressed the dry cleaning industry, forcing Sid to diversify into the uniform rental business. This move allowed Tuchman Cleaners to thrive while other dry cleaners were forced into bankruptcy. Sid did not stop there. Eyeing another opportunity, he partnered with Bill Pulley (owner of a 115 store chain in Ohio), Larry Senn and Jim Delaney (both dry cleaning consultants), to found Apparelmaster, a franchising firm that licensed a uniform rental system to dry cleaners. Apparelmaster grew to over 300 licensees worldwide, enabling many to survive the polyester boom.

While in business, Sid loved helping, mentoring and finding ways to have an impact on others’ lives. He helped his employees in various ways whether putting their children through college or assisting with house down payments, or supporting them in times of need. He made it a point to know all of the families of his employees and even called all their children by name. In the community, Tuchman Cleaners originated the Coats for Kids program that is now a national phenomenon. At that time, people brought children’s coats to any Tuchman Cleaners branch where they were cleaned and then distributed to children in need.

In 1982, Sid sold Tuchman Cleaners to the Johnson Group, the largest dry cleaning company in the world with 682 package plants in the United Kingdom. Johnson retained him under a five-year management contract and as a director. It proved to be invaluable experience where he learned highly sophisticated management practices. These experiences allowed Sid to begin a second career in 1988 as a consultant. He started Tuchman Training Systems brought these best practices via management-training seminars to dry cleaners and other business people throughout the United States, Canada, New Zealand, Australia, China, Spain, Japan and the United Kingdom. He produced two best-selling CD and workbook sets entitled How To Attract and Hold Customers and Clients and Sid Tuchman’s Professional Selling Power. His favorite catch-phrase was “nothing happens in business until someone sells something!”

At one of those seminars given to International Fabricare Institute (now Drycleaning and Laundry Institute), seated in the audience were Lang Houston, Bruce Squires and Ed Ellis, leaders in our industry. With Sid’s knowledge of the industry and his ability to brand successfully, they suggested that he start a National Management and Cost Group. Its great success through the years has been acknowledged as a tremendous asset to many in the industry. The group continues to make a difference today under the name Tuchman Advisory Group (T.A.G.), his daughter Ellen Tuchman Rothmann serves as President. In 2011, Sid received the highest honor given by the Drycleaning & Laundry Institute – The Diamond Achievement Award. At the event, Sid said that receiving the award was “the proudest moment of my business life.”

He volunteered his time and monetarily supported many organizations throughout his lifetime. He was president of the Indianapolis Hebrew Congregation and vice-president of the Better Business Bureau and the Jewish Community Federation of Indianapolis. Sid served on many boards including the YMCA, Girl Scouts of America, Salvation Army, the Johnson Group Inc., Jewish Vocational Services of San Francisco, the Borns Jewish Studies Program at Indiana University and many others. Sid Tuchman and his wife were the recipients of the Spirit of Life Award, presented to them by the City of Hope and they launched the Sid and Charlene Campership Fund through the San Francisco Jewish Community Foundation.

The family requests that memorial donations be made to: the “Indianapolis Hebrew Congregation Foundation” 6501 N. Meridian St., Indianapolis, IN 46260, which Sid had the foresight to begin in 1976 during his tenure as President.