It was cold but sunny on that last Saturday in October. The line started forming about 7:00 a.m. A chance to obtain warm jackets had the children checking out the racks of colorful clothing and trying to decide which one they wanted to take home.

COATS FOR KIDS had begun. This is the 16th year the Southern California Cleaners Association, the Glendale Sunrise Rotary Club and the Salvation Army have joined together to bring coats and other items to children less fortunate. “Every year, I get such satisfaction and joy out of seeing this project succeed,” said Ray Rangwala owner of Esteem Cleaners Pasadena.

This project started sixteen years ago. Ray is a member of the Glendale Sunrise Rotary Club. He happened to attend an annual Rotary meeting. Seated next to him was another member, Dave Woods, from the Canoga Park Rotary. Dave mentioned a Salvation Army Project at his Club where they collected used clothing and distributed the clothing to the needy through the Salvation Army. Ray is also a Board member of the So Cal Cleaners Association. “I thought what a great way to give back to the community. I knew members of the So Cal Cleaners Association would be willing to help out so COATS FOR KIDS project was born,” Ray remembers.

Ray contacted the Glendale School District and along with the local Salvation Army, they developed a plan. There were 26 schools in the District and the PTA Associations spread the word that donations were needed. Over 50,000 flyers were printed and sent home with the kids from school. This helped spread the message throughout the neighborhood. The Rotarians picked up the coats and took them to the local drop off point. From there, the dry cleaners would pick up the garments at the beginning of the week and return them cleaned by the end of that week.

The lowest income Elementary School was chosen for the distribution site. Flyers advertising the “free coats were translated in 3 languages: English, Spanish and Armenian.

This is how it started and the system remains in place 16 years later! The following members participated this year: Bryan’s Cleaners, Pasadena; Esteem Cleaners, Pasadena; Perfect Cleaners, Los Angeles; Pico Cleaners, Los Angeles; Kona Cleaners, Orange. Milt & Edie’s Drycleaners, Burbank were on standby. Scott Bell of Bryan’s Cleaners in Pasadena said he always looks forward to helping in this project. “No matter how busy we are; I will always find time to clean these jackets. It is for such a great cause.”

Since the program started, there has been over 40,000 pounds of clothes cleaned. Often they are given other articles of clothing. These are also cleaned and the children are offered these items as well. The jackets were all gone by 10:30 a.m. Another successful project finished. If you would like to participate next year, contact the So Cal Cleaners Association www.socalcleaner.org.

Besides spearheading this project, Ray is also a Director of the California Cleaners Association. He is always willing to help anyone in the dry cleaning industry. He has other charity projects he is involved in as well. This is a man with a great heart. Thank you Ray, the Southern California Cleaners Association, and the Glendale Sunrise Rotary for making this world a better place. 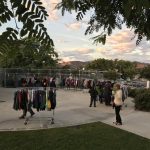 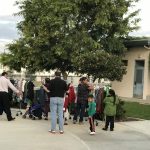 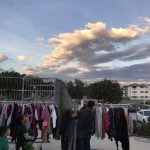