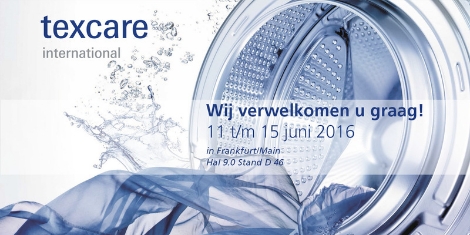 Growth in the textiles, logistics and IT segments – Strong growth in exhibitor numbers from Italy, the Netherlands and Turkey

Texcare International 2016 has already exceeded all expectations. Over 310 exhibitors – 20 percent more than in 2012 – will present their latest products and innovations at the world’s leading trade fair for textile care from 11 to 15 June 2016. Once again, the number of international exhibitors has risen with a good two thirds of companies (67 percent) coming from outside Germany (2012: 63 percent). This big increase in the number of exhibitors has been made possible by the inclusion of Hall 9 in addition to Hall 8. Thus, Texcare International will occupy 30 percent more exhibition space this June than in 2012. Ruth Lorenz, Vice President, Technology & Production, of Messe Frankfurt explains, “To open Hall 9 was the right decision because it enabled us to expand the range of products at Texcare International 2016, as well as to make the fair even more international, and thus ensure it is orientated even more towards the needs of this dynamic market.”

Particularly strong growth has taken place in the fields of textiles and accessories, as well as logistics, material flows and information technology. The number of companies showing textile products for hire services, e.g., workwear, bed and table linen, clean-room textiles, mats, washroom hygiene, terry products and towel rolls, has climbed by 50% in comparison to 2012. Up 34% is the number of exhibitors in the logistics, material flows and information technology product segments. About this, Ruth Lorenz says, “The high degree of dynamism in these segments mirrors that of the market. Textile service is growing continuously and Industry 4.0 is making IT and innovative logistics solutions more important than ever before.”

From Europe, there has been an increase in the number of exhibitors from Italy, the Netherlands and Turkey. Nations represented for the first time on the exhibitor side are Iran, Lithuania, Pakistan, Thailand and the Ukraine. The number of German companies has also risen from 95 in 2012 to 102 for 2016.

The individual product segments and market leaders are distributed evenly over the two exhibition halls. Thus, the exhibitors in Hall 8.0 include Ecolab, Girbau, Jensen, Lavatec, Multimatic, Ilsa and Pellerin Milnor while among those to be found in Hall 9.0 are, for example, Alliance, Kannegiesser, Kreussler, Miele and Veit. Many

National and international manufacturers have opted to increase the size of their exhibition stands this year in comparison to the last Texcare four years ago.

Messe Frankfurt is one of the world’s leading trade fair organizers, generating around €645* million in sales and employing 2,297* people. The Messe Frankfurt Group has a global network of 29 subsidiaries and 57 international Sales Partners, allowing it to serve its customers on location in more than 160 countries. Messe Frankfurt events take place at more than 40 locations around the globe. In 2015, Messe Frankfurt organized 132 trade fairs, of which more than half took place outside Germany.

Comprising an area of 592,127 square meters, Messe Frankfurt’s exhibition grounds are home to ten exhibition halls. The company also operates two congress centers. The historic Festhalle, one of the most popular venues in Germany, plays host to events of all kinds. Messe Frankfurt is publicly owned, with the City of Frankfurt holding 60 percent and the State of Hesse 40 percent.