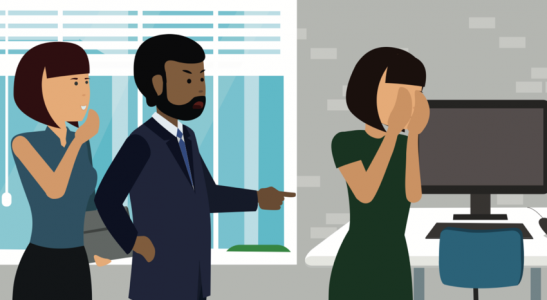 Like a deadly disease, a toxic workplace can contaminate.

When relationships in the workplace become a source of stress for people, that stress can take a larger toll than you realize. The bottom line predominates instead of a work-life balance and oftentimes leadership is one of the most important factors in setting the tone for a workplace’s emotional culture.

Unfortunately, leadership can also be one of the major causes of stress in the workplace, when a leader displays certain behaviors and characteristics that contribute to a negative, even hostile working environment.

Leadership is about leading people, which includes listening to those on the front lines, those at different levels of management and all their meaningful concerns. Some leaders unfortunately emphasize their own desires and ideas at the expense of any receptivity or openness to what those who work with them have to offer. A continued unwillingness to hear or respond to concerns meaningfully can lead to many conflicts and problems down the line, as well as employee dissatisfaction, resentment and attrition.

According to Alan Goldman, author of ‘Transforming toxic leadership,’ “while it is important for leaders to provide guidance and clear goals to their employees, it should not be at the expense of any other goal except their own self-advancement.” Narcissism has its limits; employees can easily detect when they are viewed more as pawns than people, and when the leader’s goals do not seem to relate to anyone else’s beyond their own naked self-interest. No one likes someone who never tries to share.

Nothing undermines a leader more than backtracking or shuffling on rules or guidelines they set up for their employees. This is not to say there shouldn’t be any room for flexibility or amendment on established protocols or procedures at a workplace, but those potential changes should be part of organized dialogue and reasonable consensus around a core of consistent philosophies and principles, communicated clearly and directly to everyone. When leaders create secret sets of rules for different parties or make things up or waffle as they go along without any genuine discussion, conflict and resentment can build and brew. Dishonesty always poisons morale and nearly always comes to light.

Leaders need to have a guiding ethical core that informs their decisions and how they decide to prioritize and work with the people around them. They need to care about values like fairness, social justice, equitable behavior, empathy and humanism.

Sometimes these values can run directly in the face of other priorities like profit-building, fame, publicity, or whatever inspires people to seek power. But in the end, a lack of ethics often leads to corruption and a human cost when people are thrown under the bus. Ultimately, their chickens may come home to roost.

Mitchell Kusy, ‘Toxic workplace’ states that “bad leaders can sometimes be so disconnected as to refuse to see toxic or incompetent employees also poisoning the workplace around them, even if the leaders themselves are not engaging in those behaviors directly.” If employees see a leader ignore or even reward and protect bad behavior, their morale and dissatisfaction will foment accordingly and they will understandably blame the leader for their negative colleague’s running amok.

Leaders can sometimes be negative through indifference; if they don’t take time to nurture or help others under them develop their own career tracks or paths for future development, employees will feel stagnant and will also not work to their full potential. Opportunities for mentoring need to be communicated and distributed fairly. Employees can easily see when they are picked last for the team in gym.

Insecure leaders will often surround themselves with a small cadre of “yes” people who parrot and mirror themselves completely, leaving everyone else to feel like the uncool kids in middle school at best, or in line for the chopping block at worst. Cliquish behavior causes dissent and splitting within an organization and breeds resentment. General unity and diversity and openness of perspectives within an inner circle and fluidity with all employee levels should be a more harmonious goal.

In the worst-case scenario, a leader may become abusive and belittling to people around them, using foul language, threats, or coercion. This behavior should not be condoned at any level of any organization.

Overall, leaders must be held to a higher standard since they are responsible not just for themselves, but for the people they work together with. They are the ones who have the decision-making power to institute positive and helpful dynamics in the people in a workplace; but sadly, there are many times, past and present, where they choose to use power to just exert their own sense of control or self-serving goals.

The solution starts with trusting people first. Earning people’s respect. Be compassionate to your people’s circumstances. Give your people development opportunities. Respect the way people like to get their work done. Encourage autonomy of decision-making. Let people be themselves. The less hierarchy, the more people feel included and that produces a thriving, collaborative culture. Fight toxic work cultures by making your company transform into being Culture First. It starts with people.

Lenny Gershater has served the drycleaning Industry for 30+ years as a software sales executive for leading POS organizations. As a former owner/operator, familiar with the daily challenges, he has helped hundreds of drycleaning and laundry owners resolve their bottlenecks and achieve their specific business goals through cost effective software solutions. View all posts by Lenny Gershater →