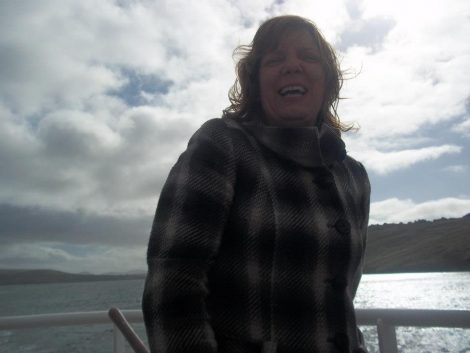 The Company: Along with her daughter, Buckland founded the business in November 2013 in the South Atlantic archipelago. Buckland’s daughter has since moved on to other things.

Due to its remote location, certain challenges must be overcome to keep things running smoothly such as orders from suppliers being made up to six months in advance. “If something breaks you have to fix it yourself, but it’s all fun,” said Buckland.

An unexpected illness in 2015 temporarily put Buckland on the sidelines. During this pivotal time, Lucinda Lowe stopped by Scotia to visit a friend who worked there. Seeing how busy and hectic things were, Lowe rose to the occasion to lend a helping hand. Lowe slowly phased out her other job and has been with Scotia ever since. Buckland credits Lowe with not only keeping her sane but also being the main driving force of the business by managing daily workloads.

Adrian “Bean” Minnell (Buckland’s other half) has been instrumental by being available around the clock for equipment maintenance, machinery repair and providing support for various areas in need of on-demand and emergency troubleshooting.

Early Aspirations: One of Buckland’s favorite memories from childhood involved gathering sheep on horseback with her father and elder sister. Going into the dry cleaning industry was perhaps the furthest thing from her mind. “I wanted to be a farmer,” recalled Buckland. “I sort of fell into laundry and dry cleaning work when I moved to the United Kingdom in 1990 after getting married.”

The Conflict: The Falklands War of 1982 was something Buckland witnessed first hand as a young teenager. She feels a sense of indebtedness to those who fought and died in battle as well as to the families of those that made the ultimate sacrifice. Buckland has made a personal commitment to make the most of the opportunities that come her way by giving her personal best in every area of her life. “I’m persistent, I hate failure, and that drives me to get through the bad days, and we all have them,” she said.

Defining Success: For Buckland, the criteria for excellence depends on the task at hand. “I guess I move the goal posts on that a lot,” she said. Being able to make payments on the business loan was foremost, but she knocked that out in February. There is also the minutiae of remembering all that needs to get done on any given day as well as getting the paperwork organized. Ultimately, it comes down to taking care of the satisfied patrons who use Scotia’s services. “Success to me is a happy customer,” Buckland said.

The Finishing Touch: One of the characteristics that fuel Buckland’s motor is the ability to keep a fresh perspective even through some of the most repetitive tasks. Taking something new out of doing the same thing day in and day out is an essential quality for Buckland and her team. “Some weeks we will hand iron 500 shirts, but we get a lot of satisfaction out of seeing them all ready for delivery,” she said. “Being a little bit crazy is definitely an essential quality and Lucinda and I have a lot of laughs at ourselves.”

Words of Wisdom: A credo of Buckland is to charge enough to make a reasonable profit and no more. “If you wouldn’t pay for it, don’t expect a customer to,” she said. “And don’t be greedy. Look at your market and decide if you would rather be busy or not.”

Education and Personal: Buckland, 48, graduated from University of Bolton (Lancashire, United Kingdom) earning a Bachelor of Arts with Honours in History.

Minnell and Buckland have been together as a couple for nearly 11 years and combined, have five grandchildren.

When she has time away from Scotia, Buckland loves to read and go off-roading in her Land Rover Defender 110.