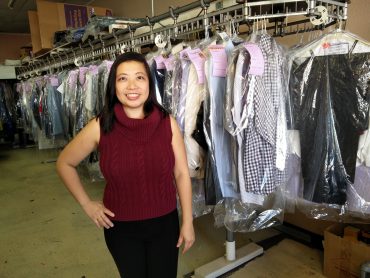 Current Position: Elfira Sidharta is the owner of Magic Touch Cleaners in Tempe, Arizona. “My store is best described as a small mom and pop dry cleaner,” Sidharta said of her establishment that mostly serves young professionals and students.

The Early Years: Sidharta was born and raised in Yogyakarta, Indonesia. Yogyakarta was the capital of Indonesia before relinquishing that designation to Jakarta. “My city is now more known as a center for culture and the arts,” Sidharta said.

“As a kid, I was pretty quiet and quite naughty. I think I played too rough as a girl,” recalled Sidharta. As a result of lacking interest in “girly” things, she had a difficult time making friends at school. “Looking back, I felt that things that interested me weren’t very much supported by my culture at that point in time. ”

As she matured, Sidharta developed better people skills and also the ability to meet new people and make friends. She said that some of her fondest memories of growing up in Indonesia involve roof-climbing, taking bike rides with friends to the countryside and gathering twigs to “play cooking with real fire in the backyard.”

Crossing the Pacific: When she was 21, Sidharta’s family moved to the United States and settled in the Southern California area. She enrolled at California State Polytechnic University, Pomona and earned a Bachelor of Science in Chemical Engineering.

Pre-Dry Cleaning: After finishing college, Sidharta worked various jobs. She did inside sales for a chemical company and dabbled in the restaurant industry. She eventually landed at Neutrogena Corporation in Inglewood, California. She held multiple positions over a three year period for Neutrogena, the most recent being Project Manager for Product Validation.

A New Opportunity: As her contract was expiring, Sidharta faced the decision to sign another agreement and continue with Neutrogena or try her hand at something new. It turns out that Sidharta was ready for a new challenge. A friend who moved to Arizona told her of a dry cleaner that was for sale. “I flew from L.A. to Arizona to visit the store and said to myself that this is something I could do,” Sidharta said of the idea to venture into the previously unchartered territory of fabric care.

In April of 2013, she took the plunge and purchased Magic Touch Cleaners. She was 30 years old, single with no children and determined that the timing was perfect to embark on a different career path. “I had the time and figured I could completely throw and apply myself into the work necessary to run a dry cleaning business,” said Sidharta. She believes that the commodity of time was the capital she needed to make her newly acquired company profitable. “When you have all the time and attention to devote to a new venture, I believe it is the best way to be successful in something new.”

Growing Pains: April will mark the 5th anniversary of Sidharta owning and operating Magic Touch Cleaners. As with any business, it has not all been a smooth road. She has experienced the challenge of machines breaking down due to age and reduced maintenance. “I feel that my store is still a work in progress with a lot of room for improvement,” Sidharta said. “In my experience, the progress depends on three things –- God, community support and my own effort. The more I have these three, the faster I grow.”

An Attitude of Gratitude: Devout in her Christian faith, Sidharta is careful to reflect any personal glory and accolades to God. “I feel like He is the One who makes everything possible for me,” said a grateful Sidharta.

“I give a lot of credit to my mechanic who provided services and let me pay whenever I had the money, especially in the early years of my business,” she said.

Sidharta also networks and partners with friends she has made in the dry cleaning industry. Having their support to lean on and advice to follow during tough times has been an invaluable resource.

She is especially thankful for her personal friends, who on short notice, had selflessly given of their time to assist in the store when Magic Touch was short on labor.

Laser Focus: One of the things that help keep Sidharta on track is having a clear vision of what she wants Magic Touch Cleaners to achieve. “Having a vision and working toward the goal will keep you motivated during the hard times,” she said. “When life throws you a curve ball, you will be able to easily navigate your course of action.”

Recreational Time: Skiing, scuba diving and travel are at the top of Sidharta’s list of pleasurable activities when she is not busy running her business. Well-versed in domestic and international travel, Sidharta is as comfortable visiting highly populated cities in foreign countries as she is tiny and remote communities off the beaten path. Her idea of a dream vacation is back-packing in a distant and foreign land, staying in a hostel and experiencing how other cultures live in different parts of the world. “Out there, there are a lot more nice people than the bad people you read in the news.”

Personal: Sidharta, 35, is single and lives in Chandler, Arizona. Although Sidharta spends the majority of her time in The Grand Canyon State, she stays connected to her roots in the Southern California area with periodic visits to her father and siblings.