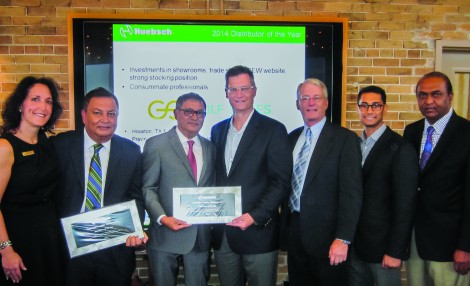 “We are honored to name Gulf States Laundry Machinery the 2014 Distributor of the Year,” said Kathryn Rowen, Huebsch North American sales manager. “Gulf States Laundry Machinery has demonstrated exemplary customer service and sales, serving as a model for others to follow. Gulf States was previously named 2011 Distributor of the Year and again are receiving this prestigious award, establishing them as a leader in the Huebsch distributor network.”

“I was completely stunned when I found out that we won this award a second time,  it’s a tremendous honor,” Parmar said. “I truly believe that Huebsch offers the best quality, most aesthetically pleasing machines on the market with the best vended distribution network in the country.”

Founded in 1984 and headquartered in Houston, Gulf States is recognized as one of the nation’s premier laundry and dry cleaning distributors. The company began offering coin and on-premises laundry equipment about five years ago and Pravin selected to represent his brand of choice: Huebsch.

“We represent and distribute only the leading manufacturers in the industry and Huebsch is one of them.” Parmar said. “Huebsch offers the best customer experience and a team of knowledgeable professionals who are responsive, flexible and dedicated to helping our business grow. Additionally, Huebsch equipment now features new colors on their overlay control panels and bright chrome accents, giving the equipment a unique look that our customers love.”

“Gulf States consistently reinvests into their business, showrooms, personnel and websites,” Rowen said. “They are always customer focused and undeniable, consummate professionals. They’re the best of the best.”