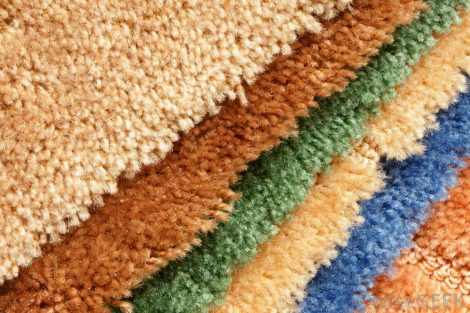 1920 New Versus Old Ideas in Cleaning

If one general term could be applied to the manner of all cleaning up to the present, that term could well be “scattering”; for in all the various steps of sweeping and dusting, the work was done in such a way as to scatter and spread the dust particles (and bacteria) from one place to another. The corn broom swept the dust out of the carpet, only to raise it in the air so that it lodged on pictures, moldings, etc. Again, the feather duster removed the dust from these same pictures only to have it fall on the floor, and thus went on a continuous cycle of dust which was never entirely eliminated from the house after all. When most folks think of rug origin they think of Persia and Turkey.

Below is a Guide to Antique Rugs.

Braided rugs have a rich, deep history that goes back further than most people realize. Learning the history behind this amazing home accessory will allow you to appreciate them just a little bit more. In this post, we’re going to take you through a brief timeline of the braided rug’s history and origin, revealing how they came to be such a popular home accessory. While the first person responsible for inventing them remains a mystery, historians believe braided rugs were created during the early years of America’s colonization by the British. During the late 1500s to early 1600s, braided rugs began to pop up in the new American colonies. Of course, it didn’t take long for the popularity of these stylish yet innovative rugs to spread into other parts of the world. The first floor coverings made in the American colonies were rag rugs. The people had no new materials to spare for floors and there was no corner store to go to for supplies. They cautiously saved every scrap of worn-out, used-up textile material from all sources. These scraps were usually wool, very seldom silk and in later years’ cotton. Remnants were cut into strips, sewn together and rolled into big balls to be made into rugs when time allowed. Old stockings, clothing and bed linens which had outlived their original purposes became valuable all over again. In those early days there was no organized industry for making floor coverings. The thrifty folk of Pennsylvania and Maryland, and to a lesser degree New England, were accustomed to operating hand looms in their small houses and wove these old scraps on them. The loom would be strung with strong linen warps, and the long strips of rags were drawn under and over and tightly pressed together to make a narrow carpet, since the looms were narrow and could do no better. To make a wide carpet one sewed together a number of strips.

Our early rugs consisted of three major forms, identified by their method of construction. The first was made with a strong, firm cloth base to which other material was stitched to make it thick and warm. Rugs of this type included the so-called tongue or button and patchwork rugs, as well as some shaggy or fluff rugs. The second type was made by interlacing one or more threads with the aid of some very simple instrument such as knitting needles, crochet hook or sewing needle. These included braided, crocheted and knitted rugs. The third major type consisted of rugs on a fabric with an open mesh through which yarn or strips of cloth were prodded with a punch, drawn with a hook or embroidered with a needle. These are now spoken of as embroidered, needle tufted and hooked. The method used was determined by the materials available, the use to which the rug was to be put and the equipment most congenial to the skill or ability of the worker. The earliest home-made rugs were not hooked. They were little more than the overlapping of pieces of cloth sewed or woven upon a coarse homespun background, usually linen. This served a basic need but could scarcely be called decorative in any real sense.

Who first had the idea of using worn out clothing and old blankets to make rugs is not known. Authorities agree, however, that the earliest rag floor coverings were put together by sewing pieces of cast-off clothing onto lengths of homespun and by overlapping the edges of the patches to give the rug greater warmth and durability. Rugs like this were known as tongue rugs because they were made by cutting small tongue-shaped pieces and sewing them onto a backing so that each row overlapped the next. More picturesquely, later on, these were called petal rugs, identical in principle. Button rugs were similar, consisting of concentric small scraps of button size sewed upon the backing. From such beginnings came the patch rug or appliqué rug. This in due course was followed by the braided rug, and still later by the gayer designs of the hooked rug. The way you clean everyday spills and stains from area rugs depends upon the fabric from which the rug is woven. Here are some general guidelines:

• Blot – do not rub – any excess liquid spill before adding a cleaning solvent. Repeat: DO NOT RUB!

• Wool rugs should be cleaned with a neutral detergent and dried quickly. A good example of this is Dawn® dish washing liquid mixed with water.

• Do not use “oxy” cleaners on wool rugs. They will fade the dye in the rug.

• Be sure to quickly blot dry with a towel using pressure. Do not use heat or let it air dry completely. This will leave an odor.

• If an all-over cleaning is required we recommend professional steam cleaning by a dedicated rug-cleaning service. Colors may show a slight change (no more than 5%) when cleaned. Darker tones are more susceptible.

• For rugs with plush piles, do not use a dry powder cleaner. The cleaning residue will be difficult to remove. Dry powder cleaners are OK to use on surface stains on low pile rugs.

• Synthetic rugs should be cleaned with a neutral detergent and dried quickly. A good example of this is Dawn® dish washing liquid mixed with water.

• It is OK to use “oxy” cleaners on synthetic rugs. Be sure to carefully follow the cleaner’s instructions.

• Should only be cleaned using a dry cleaning process.

• Rugs made with natural / plant fibers should only be cleaned with a neutral detergent and dried quickly. A good example of this is Dawn® dish washing liquid mixed with water.

• For liquid spills, dry both sides of your rug.

• For liquid spills with color (soft drink, juice, etc.), sprinkle baking soda or salt on the spot to absorb the color. Leave for a few minutes and then vacuum.

• Neutralize pet odors by sprinkling a mixture of 1 cup Borax and 2 cups cornmeal. Allow to stand for an hour before vacuuming. Many commercial cleaning products also work well to remove pet odors from rugs.

• It’s not recommend using your vacuum’s beater bar on any rug type. To get the most life out of your rug, only use the vacuum’s suction

• Size, construction and material determine the rug cleaning and care routine you’ll need to follow. Care for large area rugs as you would wall-to-wall carpet. That means most rugs will benefit from the following care routine:

• Vacuum large area rugs to remove dirt: As with carpet, regular vacuuming is the most important area rug cleaning step you can take. If a rug is reversible, vacuum both sides. This removes grit and grime that can wear out your rug prematurely. Take care to not vacuum any fringe. (Turn off the beater bar when vacuuming a shag rug to prevent tangling the long fibers.)

• Brush out pet hair: A vacuum will sometimes leave pet hair behind. Use a stiff brush to remove the hair, brushing in the direction of the nap of the rug.

• Turn rugs every year: Foot traffic and sun can put extra stress on area rugs. Turn them once or twice a year to even out the wear.

• Shake small area rugs: If the rug is small enough, you can take it outside and shake it or beat it vigorously to remove dirt and grit. Some areas have ordinances about shaking rugs outdoors, so check your local codes.

A beautiful wool rug can be the major design element in a room, but like anything subject to foot traffic, it needs regular cleaning to stay in tip-top shape. Wondering how to clean a wool rug naturally? We have a creative method using snow.

Old-time New Englanders swear that the best way to clean wool rugs or blankets is with snow—it doesn’t make a big mess or require chemicals that could strip the wool of its natural oils, and it turns a cleaning chore into a game kids will enjoy. (Do not try this technique on any rug that is marked “dry clean only.”)

On a cold, clear day (25°F or colder), with at least several inches of fresh powder snow, take the rug outside and leave it for a couple of hours until it has frozen.

Lay the stiff carpet in the snow and whack the exposed surface with a broom. Shake the rug out, turn it over on a fresh patch of snow, and beat the other side. If you wait for a cold, dry day, the rug will barely become wet when you clean it this way, but before returning it to the house, brush off any visible snow. Then leave it outside for another hour or so to let sublimation—the cold weather process whereby snow or ice transforms directly from solid to vapor—does its work. By nightfall, the rug should be clean and dry (but don’t return the rug to its place until it is completely dry).

Well that’s about all I know about rugs and I hope these tips and history will provide some rules of law towards cleaning area rugs. If you give away the business to your competitor, it’s lost revenue for you!