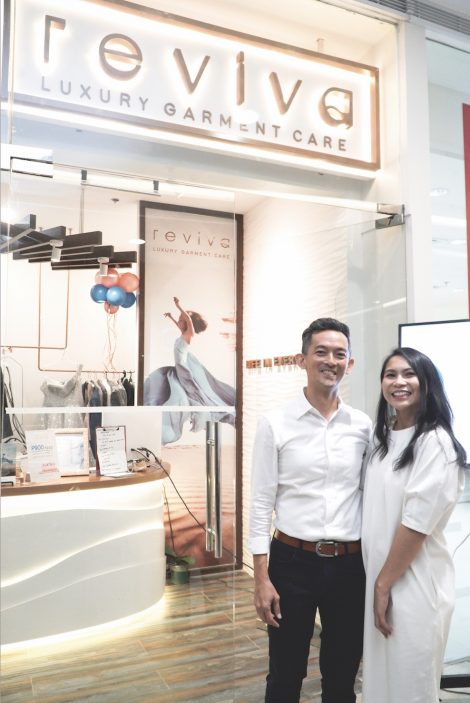 The Company: Headquartered in the Metro Manila area of Pasig, Philippines, Reviva Luxury Garment Care is a trailblazing pioneer of garment care sustainability by being the first company to introduce the wet cleaning system to this western Pacific Ocean archipelago in Southeast Asia.

Ang works in the business with her husband Carlos, who serves as the CEO of Reviva Luxury Garment Care. “He encouraged me to pursue this and has given me free rein to lead Reviva,” Ang said of her spouse and business partner.

How It Started: Ang met her husband in college at the University of the Philippines, where she graduated with a Communication Research degree. Upon graduating, she put her diploma to use by taking a position with GlaxoSmithKline.

It took Ang three years to pull the trigger on her entrepreneurial aspirations. She was inspired to leave her secure job and make a run at business ownership after reading Robert Kiyosaki’s Cashflow Quadrant: Rich Dad’s Guide to Financial Freedom.

Eighteen years ago, Ang began her foray into the laundry industry. “We started as a simple mom and pop laundry shop outside Metro Manila,” said Ang. “We have grown because of the franchising system we instituted in the year 2009.” **

Business Climate: “Just to set the record straight, the laundry and dry cleaning landscape here is far from the developed countries,” stated Ang. “A laundry shop here consists simply of a set of machines offering full-service laundry; dry cleaning is not as popular since our garments are mostly made of cotton, suitable for a tropical country.”

She has a strong desire to elevate her industry to the next level and for its professionals to garner the respect they deserve. “It’s not a glamorous profession to be in,” Ang said of her career in garment care. “But if you understand the process behind it, it’s chemistry; there’s a science behind it.”

Growth Spurt: Five years ago, with the help of an investing partner, Ang built an industrial laundry plant that catered to hospitals, hotels and the uniforms of some notable companies, such as Nestlé Philippines.

Paradigm Shift: “In 2018, our German chemical supplier Kreussler helped us to pursue wet cleaning, and a year later, we opened an operational wet cleaning store,” said Ang. “Awareness of the system in the Philippines is not that high, so education and marketing to the public are very crucial for this new service.”

Comfort Zone: A self-described introvert, Ang said she works well with her hands. The time and effort put into the care of a garment have a therapeutic effect on her. “I guess that is why I feel at home with laundry and dry cleaning because the processes involved in it grounded me,” Ang said.

Staying Ready: Not so much a fan or proponent of luck, Ang instead subscribes to preparation and practicing daily habits that lead to success. “When an opportunity comes knocking, you have the eye to see it and accept the challenge.”

Definition of Success: “For me, success is the feeling of having accomplished something and being content with it no matter how small the achievement is.”

Leadership Style: She claims to be very “hands on to a fault.” So much so that Carlos has been encouraging her to delegate more often. Nonetheless, Ang stated that her management philosophy is to “be a doer.” She believes in the importance of demonstrating from the front and leading by example. “I’m persistent and stubborn in the way I try to solve things,” said Ang. “I’m so meticulous that I tend to micromanage.”

Advice: “Learning always comes with a lesson or a price,” stated Ang. Believing that you can only learn if you do it yourself, Ang admits that there is a flip side to the coin when it comes to being a doer. “I have my fair share of mistakes and failures, and I learned from them.”

Future Plans: Company goals are already in place to intensify training, gain more experience in the wet cleaning process, and make her country more aware of its benefits. “I think this process is suitable for us Filipinos because we are known for our craftsmanship and patience,” Ang proclaimed. “We have the TLC factor that comes with the wet cleaning process, especially in the finishing touches; it’s a good fit.”

Already known as the first and only wet cleaning facility in the Philippines, Ang has some lofty expansion goals. “We also want to bring this system to Asia using the franchise system.”

Forecasting that garment care’s glory days might take a long road back, Ang is also intrigued with the idea of diversifying her business holdings by incorporating a Rent the Runway concept in the Philippines.

Lessons Learned: “What brought me here are the series of events that are crucial to be at this point in my life,” said Ang. “To have it otherwise, it would probably have a different outcome as well. No what-ifs; it is what it is!”

Just for Fun: Ang likes to dance. She enrolled in online ballet classes during the pandemic to help get her mind away from worrisome thoughts. “That’s my passion project right now,” she said with beaming exuberance. When they want to escape from the daily minutiae of running their businesses, the beach is her go-to destination with Carlos.

Personal: Charmaine and Carlos have been married for 18 years and have four children; one girl, age six and three boys, ages 13, 8 and 3. They make their home in Cavite, Philippines.