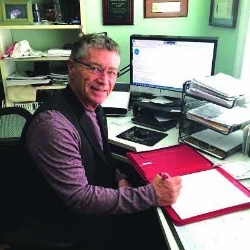 Current Position: George Archibald is the Executive Director of the California Cleaners Association (CCA), a post he was appointed to in September 2015.

About the CCA: CCA is the statewide, professional trade association for California’s best dry cleaners and the companies who serve them. Affiliated with the Drycleaning & Laundry Institute (DLI), CCA is part of an international network of cleaners. For Cleaners and Allied Trades, CCA offers money saving programs, professional counsel, educational seminars, networking events, governmental representation and the biennial Fabricare trade show and convention. CCA also assists consumers in finding a great dry cleaner as well as providing helpful information about dry cleaning.

Early years: Archibald grew up in the Chicago Heights area of Illinois. He attended Chicago area Catholic schools and spent a few years in junior college. After working at Commonwealth Edison for nine years, Archibald bought Touch Clothing Boutique, a business that specialized in apparel for men and women. Archibald eventually sold Touch Clothing Boutique when he began preparations to move to the west coast.

California Dreamin’: When he was sixteen years old, Archibald visited relatives living in California and immediately knew he wanted to relocate to the Golden State when the opportunity presented itself. He permanently migrated from the Prairie State to San Diego in the early 1980s.

Pre-dry cleaning: After settling in San Diego, Archibald partnered with a former high school classmate and started a domestic employment agency. They hired full-time, live-in housekeepers and placed them with high profile and affluent clients. Archibald’s company placed housekeepers with the wives of executives and producers from Warner Bros., the Annenberg Family and former United States President Gerald Ford, to name a few.

“It was a tough business trying to mix the menial people with the very, very wealthy,” Archibald said. “When President Reagan would stay with the Annenbergs we would go nuts!” Naturally, all of the workers hired and placed by Archibald’s agency were required to go through the obligatory screening process and necessary background checks in order to be within sneezing distance of The President of the United States.

After operating the domestic employment agency for nearly four years, Archibald was ripe for a change. He recalls, “It was a tough business and I kind of got burned out and I was looking for something else to do.”

Manor Cleaners: In 1982, Archibald’s girlfriend at the time wanted to move to Fallbrook, California. The owner of Manor Cleaners was retiring and looking to sell. “The girlfriend didn’t work out but I bought the cleaners.” The previous owners of Manor were willing to stay on and train Archibald and get him up to speed on the daily grind of owning and operating a dry cleaning establishment. “They promised to stay with me and train me. I didn’t even know how to use a spotting gun.” At the time, a state license was required to run a dry cleaning business. He eventually passed the required tests and received his license. Archibald’s expansion efforts added two drop stores to the plant he acquired in the purchase of Manor Cleaners.

Those familiar with the geography of San Diego County know that Fallbrook is on the backside of Marine Corps Base Camp Pendleton. Nearly half of Manor’s revenue came from the uniforms of the Marines at Camp Pendleton. Things are going great until Iraq invades Kuwait in 1990. “More than half of the Marine base leaves,” remembers Archibald. “They go on vacation to Kuwait.” Bills are piling up and rents are high. Ever the forward thinker, Archibald begins planning his exit strategy. “Who knows when these Marines are coming back? So I decided to do something.”

Chemically dependent: Looking for something new in 1992, Archibald scoured through dry cleaning industry trade publications and sent out two-hundred resumes in search of a job. “Four responses came back and one of them was Adco Chemical.” At the time, Adco was owned by the Van Dyne Family and based in Sedalia, Missouri. After interviewing with John Van Dyne in San Francisco, Archibald was hired. As a rookie chemical manufactures representative,  Archibald hired a manager to run Manor Cleaners so he could devote full-time focus to promoting Adco in four Southern California counties: Orange, San Diego, Riverside and San Bernardino. He eventually sold Manor Cleaners to Pete Mungo in 1993 after eleven successful years as a dry cleaner.

Over the course of Archibald’s 23-year career with Adco, he weathered multiple shifts in leadership as well as several ownership changes. Whenever a company moves in a different direction, restructuring is bound to happen. In January 2015, Archibald’s position was one of the casualties of Adco’s goal to switch gears and move forward with a new business plan.

Answering the call: Archibald was not ready to retire and found himself at a crossroads once again. He wondered what his next step would be in generating a new income stream. “I didn’t know what I wanted to do. I looked at turning homes or buying apartment buildings.” Other suitors came knocking on his door but Archibald opted to patiently wait for just the right opportunity. “Then one day I get a call from David Suber (DLI District Director, CCA Director and owner of Perfect Cleaners in Los Angeles) and he tells me that they are looking for an Executive Director for the California Cleaners Association.”

Volunteer Spirit: Archibald has served as president of the Fallbrook Chamber of Commerce for two terms (1996 and 2010) and he served more than 12 years with their board.

In 1985, he was on the chamber committee that created the wildly popular street festival known around the world as “The Avocado Festival.” Since then he has served on every committee and has been that event’s chairman 18 times. The Avocado Festival brings in 100,000 people to the little town of Fallbrook and attendees spend upwards of 1.5 million dollars on the day of that event.

In 1992, he was president of the Fallbrook Village Rotary Club. Archibald has been their treasurer for the last 10 years and currently serves on the board.

Fabricare 2016: It’s the largest independent cleaning industry trade show in California. Once again, the show will return to the Long Beach Convention Center on August 27 and August 28. Show information is available online at www.fabricareshow.com. “I believe that this year’s show is going to be one of the best and biggest we’ve ever had! I’m really excited about it,” boasts Archibald.

Clocked out: When he’s not working, Archibald plays golf and exercises. He has stayed in tip-top physical condition by doing Cross Fit for the last 3 ½ years.

Archibald is a sports fan and his rooting interests are inclined towards the San Diego Padres (baseball) and the San Diego Chargers (football).

He is currently reading a book by Jason Ramos titled Smokejumper: A Memoir by One of America’s Most Select Airborne Firefighters.

Personal: Archibald celebrates his 67th birthday on February 10th and lives in Fallbrook, California with Helen, his wife of 23 years. They are proud of their two adult daughters and granddaughter Baylee. George and Helen make it a point to take a one-week, memory-making trip with Baylee every year. Also living nearby is Archibald’s 101 year old mother.