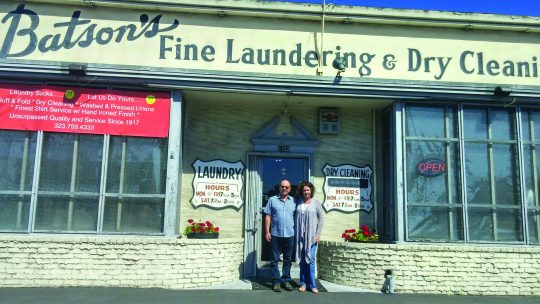 Current Position: Retired. After a successful and storied career in the fast-paced world of owning and operating a century old laundry establishment that permanently closed its doors last month, 65 year old Sammy Spera is getting accustomed to enjoying life in the slow lane.

Several factors propelled him into retirement. According to Spera, “wholesale laundry is not what it used to be when my father had every Chinese hand laundry business in Los Angeles and a lot of good accounts.” He also laments the crunch of higher taxes, a soaring minimum wage, increasing expenses and bureaucratic over-regulation that negatively impacts many family owned businesses in The Golden State. “Today is a different world,” said Spera. “The City of Los Angeles is not the most friendly place to try and run a small business.”

Medical considerations and health reasons also factored into his decision to “throw in the towel after 102 years of being in business.” He realizes that a person’s well-being is the most important thing in one’s life. “The old saying in this business is ‘old laundry men never die, they just shrink away,’” he said.

Laundry is in His Blood: “My dad started washing clothes during World War II; he was on a destroyer called the USS Glendale,” stated a proud Spera. “He was the wash man on the ship and that’s where he learned how to wash.”

Spera’s parents met in Santa Monica, California while working for The Domestic Laundry where mom marked in the clothes and dad was the wash man. They fell in love, got married and had a family.

They managed to save enough money to venture out on their own and bought Crest Cleaners and Laundry in Hawthorne, California. Mom stayed at home to take care of the family while dad built Crest into a prominent and successful establishment before he decided to sell it and retire. The elder Spera grew antsy as a result of having all of that free time. When Batson’s became available for purchase in the early 1960s, the Spera family business was born.

Batson’s Fine Laundering and Dry Cleaning: Before shutting its doors and closing down last month, the Los Angeles based company specialized in commercial laundry, wholesale bed linens and flatwork since 1917. Famous for the “quality of the finish,” Batson’s serviced many cleaners on the West side of Los Angeles and ran several home delivery routes.

Back in the Day: He fondly remembers spending a lot of time at the sand or in the ocean. “My mom would drop us off at the beach in the morning,” recalled Spera. “When the sun went down, we walked back up the cliff to get a ride home where dinner was waiting!”

As a fun loving kid growing up in sunny SoCal, having a positive attitude came easy for Spera. “I was always athletic, pole vaulted in high school and surfed up and down the west coast, including Hawaii, Mexico, Bali and Australia,” he said. “I’m also a life long dirt bike rider but my MS has made it difficult in recent years.”

Laying the Foundation: A Southern California native, Spera was born in Santa Monica and grew up in Palos Verdes. “I first started working for my father in 1966 when I was in the fifth grade,” said Spera. “Every Saturday he would get my two brothers and I up at 4:00 am.” The Spera brothers cleaned the bathrooms, swept the floors, padded the presses and greased the machinery. This work regimen continued while he attended Palos Verdes area schools.

Upon graduating from Palos Verdes High School, his dad gave him a choice to “go to school or go to work.” Spera enrolled at Harbor College and intentionally stretched a two year degree program into three years to avoid the work force. “I went to school for as long as I could and inevitably I knew I was going to end up working at Batson’s Laundry.” After completing his course work at Harbor College, Spera went to work full time for his father at Batson’s.

Changing Lanes: Much effort was put in by Spera to upgrade systems and processes at Batson’s. He did his part to expand the family business while working under his father. However, Spera’s progressive ideas didn’t always mesh with his dad’s old school ways. “At that time I was almost thirty and had to make a career change,” he said. “I left and went to work for Steve Green at Carriage Trade Cleaners.”

After working at Carriage Trade for three years, Spera departed the garment care industry to embark upon an illustrious career with Nestlé. He was a vital part of the Nestlé national sales team and traveled extensively around the country on behalf of the corporation. “It was a fun job and very enlightening into corporate world,” said Spera. “It was a part of growing up and moving on; I didn’t want to be here at 40 and still have my dad yelling at me.” His run with Nestlé lasted for 24 years until multiple sclerosis sent Spera into retirement.

The Comeback: “My brother, Sandor, took over the laundry,” remembered Spera. “Sadly, Sandor passed away on January 1, 2010 and his wife took over.” In May of 2017, after being retired from Nestlé for five years, Spera’s sister-in-law called him with the news that she was going to close the doors to Batson’s. “I decided to come out of retirement and give it a try.”

Keys to Success: Spera believes that an essential component to self-improvement is “knowing that you have done your very best that day and try to do better the next day.”

“Whatever you do in life, love what you’re doing,” said Spera. True happiness is success; be happy with yourself, your job and your direction.”

He also emphasizes that success is a natural by-product of being honest with your customers and yourself.

“If you know what you’re doing, I don’t think you need luck to be successful,” Spera stated. Drawing upon his training at Nestlé, Spera believes that luck is for the salesperson that doesn’t “know what he is doing, or doesn’t know how to overcome objections or close the sale.”

He also wants to get an RV and tour through the United States for two to three months at a time.

Personal: As Spera settles into retirement, he will have more time to spend with his two sons and two granddaughters. Spera and his wife, Judith reside in San Pedro, California in a house with an ocean view.