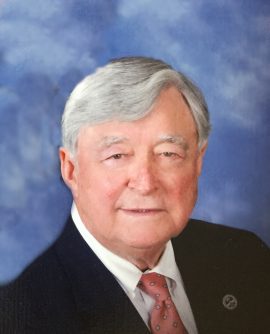 The industry mourns the passing of Thomas R. Garrett, 81 of Beaufort on Friday, September 9, 2016 at the Medical University of South Carolina due to complications related to a heart condition.

Tom Garrett was a businessman who started a One Hour Martinizing in Beaufort, South Carolina in 1968. He added locations in Beaufort and Hilton Head Island, growing his company to 10 locations. In 1984, the Johnson Group of England purchased One Hour Martinizing. Tom continued to run the operation for the Johnson Group, expanding the business into Savannah, Charleston and Myrtle Beach eventually growing it to over 40 locations. His son Ron said, “My father considered retirement, but couldn’t stand the thought of being idle. He enjoyed the challenge of working and continued until his final days.” Ron Garrett is currently Senior Vice-President, North of MW Cleaners in Houston, TX. In that capacity he continues to be an active and valued member of T.A.G.

Tom and Ron Garrett bought Lexington Dry Cleaning in 1988 and that business is still operating today. An active member in the dry cleaning industry, Garrett was President of the Southeastern Fabricare Association (SEFA) and served on the board for 20 years.

Tom was born in Greenville, South Carolina on May 19, 1935. He was the son of Tom Wesley and Mary Field Garrett. After graduation from Fair Forest High School, Tom attended Wofford College and Clemson University. Tom enlisted in the United States Marine Corps at Parris Island, South Carolina in 1953. He had the honor of playing in the Edinburgh Tattoo with the U.S. Marine Corps Band for the Queen of England at the World’s Fair in Brussels, Belgium. Tom was a proud Marine and often remarked that the jets flying over Beaufort represented the “sound of freedom.”

A Mason, he was honored with his 50 Year Certificate and Gold Emblem by Harmony Lodge No. 22 for his years of service and dedication to the craft. A Rotarian, Tom was recognized by Rotary International as a Paul Harris Fellow for promoting international understanding. A dedicated civic leader, he was a member of the Baptist Church of Beaufort. Tom and his wife Marguerite co-chaired the Beaufort Memorial Hospital Foundation Ball. He was a member of the Jean Ribaut Society and the Beaufort Yacht Club. Tom loved to cruise up and down the East Coast in his 42-foot Hatteras, The Sport of the Chase, fishing in tournaments. He pulled in marlin and sailfish and earned invitations to numerous prestigious events.

In 1972, he served as Commodore of the 17th Annual Beaufort Water Festival. “My husband was an accomplished musician. He made sure the festival parade had proper bands and floats. He absolutely loved the time, it was just a wonderful thing he enjoyed.” said Marguerite, his wife of 56 years. As commodore, Tom championed a watermelon-seed spitting contest and human checkers. In 1974, he commissioned Nancy Ricker Rhett to design the Water Festival Crest. This Crest is proudly worn to this day. He served as President of the Beaufort Chamber of Commerce and was a member of the Sertoma Club. Tom was a lifetime member of ITTAY of Clemson University. His son, Ron proudly stated, “my father remained a huge Clemson Tiger fan and attended every home football game. People remember him for being a caring person who would drop anything he had to do to go help somebody.”

Tom is survived by his beloved wife, Marguerite of Beaufort, South Carolina. A son Ron Garrett and his wife Elizabeth of The Woodlands, Texas, a daughter Tammy Bryan and her husband Woody, a daughter Denise Creech and her husband Chris Ward of Washington, District of Columbia. Tom is also survived by six grandchildren: granddaughter, Annabeth Kierspe and her husband Chase of Tampa, Florida; grandson, Thomas Garrett of Clemson, South Carolina; granddaughter, Rosemary Garrett of The Woodlands, Texas; granddaughters, Marguerite, Caroline and Kate Bryan of Darnestown, Maryland. In addition to his parents, Tom is preceded in death by his sister, Marilyn Platt.