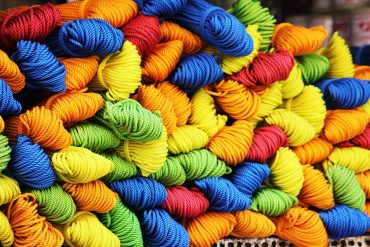 For thousands of years, civilization has existed with natural fibers to clothe themselves. These early days, people made loin cloths and garments to cover up. Crude, but thank God they were given the means and sources to make a garment. These poor folks had it rough. Thankfully, the natural fibers provided them with a warm source of cover. Synthetic fibers would not have interested these pilgrims much. Frankly, I don’t care for man made fibers and fabrics. My greatest beef is the dang things don’t breath. But they release stains easily and take no more time to spot than it takes to butter your biscuit.

Dacron is among the very first man-made fibers. All built in a laboratory by chemists searching for a Nobel Prize. Nylon and other man made fibers became important in the 1950’s due to over population, thus a shortage of animal and plant fibers. Also, the chemical companies love to have more fibers and fabrics they can sell. Sort of like punching out more products for more profitability. But hey, that’s the world we live in – you can put your cowboy boots in an oven but that don’t make ‘em biscuits!

Some man-made materials are not too bad,  in that they have some redeemable characteristics. However, wearing a plastic bag called pants and shirts, that don’t breathe, is not very nice. These garments don’t breathe unless they are a mixture of man made and, natural, breathable fibers. That is pretty much what we have today. Nobody wants to wear a bag! The problem also lies in the dye coloring such as dye and finish problems with Rayon – another man-made garment with a plant origin.

Maybe You Failed To Get A Release

Dye problems and finishes challenge even the greatest of seasoned drycleaners and wetcleaners. But with experience comes the realization that you can hardly ever ruin something that you tested first. No one (least of all the customer) said you had to go forward with cleaning – and maybe you failed to get a release. Either way, they are a potential problem and can be solved by talking to others about the sensibility of drycleaning or wetcleaning such a garment. Cotton, linen and silk are also targets for grief if not handled properly. Silk being the worst for stable dye coloring.

Are You Settling For Unskilled, Uncaring Workers?

Unskilled and uncaring workers in the drycleaning and wetcleaning departments are a problem for todays average plant. The only thing saving them is that they are selling cheap and looking away at quality. Jeff Schwarz and I were recently discussing the number of plants that are purchased and tended by folks who came into the industry with a handful of ‘want’ and a mouthful of ‘gimme.’ These unseasoned people need quality minded and trained workers or they will be losing customers left and right due to mistakes being made in these departments.

Unfortunately, our industry used power by lobbying to erase the long-time requirement for licensing in the early 80’s. Since then, anyone with a wish and a hope can open a plant – even though they never spent an hour with a consultant or trainer and never sent themselves, or their employees,  to any classes. Sadly I watched this as a trainer for some years and it always puzzled me how some people do not even want to learn. Someone told them that if they ever worked a home washer, they can do drycleaning as well. Oh Lordy! I was flabbergasted when I would go into a plant and no one would accept advice for over an hour or two free!

Maybe Mr. Pride Can Get In The Way

Offering a drycleaner to hone their craft, some would simply reply that they did not need any help. Now that is stunning! How or why in the wide world of sports can a person take that attitude? When I was in the position as a new spotter, learning,  I would hold onto anyone who came through our plant. Such as an industry representative from the Allied Tradesman. I would buy them lunch and seize every word of advice they would offer. Yes sir, I really appreciated these fine folks. I found that as a trainer and consultant that so many owners, managers or drycleaners would thumb their nose at someone “invading” their sacred territory. Here is the heart of the problems in our industry. Unless attitudes change, we are a whisper in the dark for improving the state of our business because we are indifferent to getting help. I guess Mr. Pride can get in the way.

In summary, I don’t wish to throw synthetics under the bus, for they serve a purpose. Synthetics are less likely to wrinkle and as I stated, stains don’t cling to synthetics like they do to natural fibers. They just don’t sink into the fabric so much. Having a great and positive attitude by all folks in a plant is a plus. You the owner or manager set the pace. If you aren’t interested in learning about fibers and fabrics, then the employees won’t either. I found this quote recently from an unknown source: “One of the traits of successful owners and managers is the ability to distinguish between real problems and something that simply rubs them the wrong way.”  Think on that please.

I’m headin’ to the wagon now, these boots are killin’ me! I think I’ll do some b-b-qing and rest my mind. See you next month.