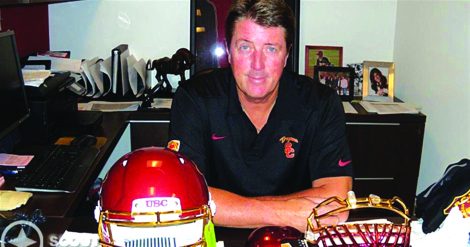 Current Position: For the last seven years, Todd Hewitt has been the Director of Equipment Operations for University of Southern California Athletics (USC Athletics) in Los Angeles, California. He is in charge of all equipment (which includes, but is not limited to, practice apparel, game-day uniforms, footwear/shoes and towels) for the university’s 21 sports teams. He has eight employees on his staff, and each one charged with two or more sports. Hewitt oversees the whole operation including the high profile and tradition-rich USC Trojans football team, which requires him to travel with the team for road games.

When you see the USC Trojans’ various athletic teams competing on national television, you might notice how their cardinal and gold school colors jump off the screen. This is primarily due to the laundry expertise and fabric care provided by Hewitt and his staff.

The Laundry Room: What Hewitt oversees at USC Athletics is genuinely a massive undertaking. To fully comprehend the breadth and extent of his daily operations would require an up-close, personal tour and visit of his facilities at Heritage Hall on the USC campus.

Hewitt says that they average 985 loads of laundry each month. This is accomplished with one 100 pound washing machine, four 55 pound washing machines and seven dryers. “When we were designing the laundry room, I was adamant about having more dryers than washers because the drying cycle takes longer than the washing cycle,” he said.

Taken also into account when designing the laundry room was freedom of access between the washing machines and dryers, work-flow effectiveness and a safe and dedicated space to store detergent, chemicals and other cleaning agents.

SoCal Native: Born in Pasadena and raised in Seal Beach, California. Hewitt matriculated to the University of California, Riverside (UCR) where he was a star baseball player. He majored in Business Management with a minor in Physical Education.

Full Circle: Hewitt’s father Don, left a coaching career at Arcadia High School to take the position as Equipment Manager for USC. “I remember going with him to SC as a six or seven-year-old kid,” reminisced Hewitt. The elder Hewitt, who passed away in 2007, would eventually join the Los Angeles Rams as their Equipment Manager, retiring 32 years later from the St. Louis Rams.

He fondly remembers working Rams games at the Los Angeles Memorial Coliseum with players like Merlin Olsen, Deacon Jones and Roman Gabriel. “As a kid, I grew up watching these guys on TV and then my dad got the job with the Rams. I got to hang out with them on the field and in the locker room, and that was really something special,” Hewitt said enthusiastically.

When Hewitt graduated from UCR, he intended to work for the Rams for one year. “That led to two years and so on for 34 years,” he said. After leaving the Rams, Hewitt took the Director of Equipment Operations job at University of California, Berkley. He had been there for ten months when USC came calling. It was an opportunity too excellent to pass up and a chance to return to his Southern California roots.

Girl Power: “My three boys grew up around the locker room,” said Hewitt. “They would go with me every Sunday, walk the sidelines and do the water during Rams games.” Daughter Megan (currently a Social Media Marketing Manager for Angl Clothing), is the youngest of four children and the only girl. The kids had to meet an age stipulation (10 years old) and certain height requirement to tag along at work and “assist” dad on the football field with the team. Coarse language, masculine attitudes and other male shenanigans were par for the course in Hewitt’s work environment, and he did his level best to shield Megan for as long as he possibly could. However, once she reached the requisite age and designated height prescribed by Hewitt, she pressed him to allow her the same privileges as her three older brothers. Hewitt recalls warning Megan, “I don’t know if you want to go down to the sidelines with me, honey. Being a girl, you might hear some things you probably shouldn’t hear.” Megan countered with, “Dad, anything that is said on the sideline I’m sure Mom has said in the house already!” “I couldn’t argue with that, and I had to let her go,” said Hewitt with a hearty chuckle.

Greatest Show on Turf: Hewitt said that the proudest moment of his professional career was in the year 2000 when the St. Louis Rams defeated the Tennessee Titans to win Super Bowl XXXIV at the Georgia Dome in Atlanta.

A Family Tradition: Just as Hewitt followed his father, Don, into the exciting and glamorous field of equipment operations management, his two oldest sons have followed in his footsteps. Travis works on Hewitt’s staff at USC Athletics and Josh is Director of Equipment Operations at Fresno State.

The Long Haul: Hewitt has been doing what he does at a high and supreme level for several decades but has no timetable for retirement. “I have always loved what I do, and for my whole career, I’ve enjoyed getting up and going to work every day,” Hewitt said. “When the time comes that I don’t enjoy going to work anymore, that will be the time that I’ll think about retiring.”

Although he shows no signs of slowing down just yet, Hewitt has an inkling of how the post-USC phase of his life might look. “This is my last stop; I’ll ride off into the sunset when I’m done at SC,” he said. “I’ve already told my son at Fresno State that wherever he ends up, I’ll just come to help him for a while and get in his way whenever I do retire.”

Head Strong: The last few years, Hewitt has been very involved with helmet safety through the Lott IMPACT Trophy. With concussions among athletes being at the forefront of national discussions on ESPN and sports radio shows, he is passionate about educating the youth, their parents and coaches about helmet safety, proper fitting and concussion education. He believes that much work still needs to be done, not just in football but other sports as well. “I think we will see changes in the safety of the athlete,” said Hewitt. “We’re trying everything we can to protect the athlete and get them in an optimal position to perform at the highest level.”

Advice: “I enjoy every day that I go to work,” Hewitt said. “Do something that makes you happy and something that you enjoy; have a passion for what you do.”

Success Principles: One does not achieve the level of success in the industry and high regard that many colleagues have of Hewitt without some core values, principles and a dynamic support system.

He claims that “reliability and effective time management” have been the key components to his longevity and achievements. Of his support system past and present, Hewitt said: “my father was my biggest supporter and mentor; and my wife, Kathy, for letting me do what I love for all these years.” Hewitt continued, “She has put up with me for a long time, in a business where you spend during the season, basically seven days a week.”

Clocked Out: When he is not helping USC Athletics, Hewitt cherishes precious moments with family. His hobbies are spending time in the yard and woodwork.

He is also very active and supportive of The Special Olympics. “I got involved a long, long time ago in the organization with Vince Ferragamo when he was with the Rams.”

Personal: Todd, who turns 61 in October, has been married to Kathy for 33 years. The couple lives in Seal Beach, California. They currently have three grandchildren with a fourth one due to arrive this month. Kathy was a salon owner during their time in St. Louis and now has her own business as a consultant and expert in the beauty, health and wellness industries. Dalton, their youngest son who lives in St. Louis, works in banking.