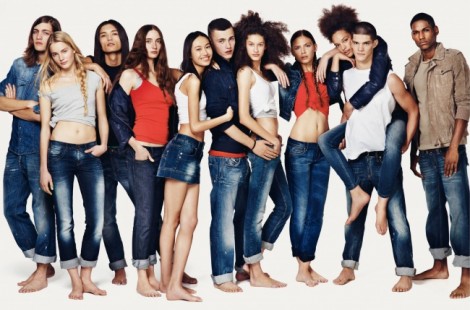 One of the things New York has over other states and cities is their renown clothing industry. Trends and fashions are set there and passed on. Many are also influenced by Los Angeles and Europe in general. I usually think of Paris, France and Italy when I think of fashions, as they have long been trend setters in the clothing industry and often times those trends make their way to the United States. Every year fashions change and eventually roll back around to repeat themselves. I believe every period in the past 200 years has had change in clothing styles. The ones today for women in particular are, to me, ghastly as far as pants go. These tight stocking like pants with high boots look pretty weird. If a woman was concerned about her figure, the last thing she would wear would be tight pants because every single flaw is accentuated! Skirts and dresses can hide many a flaw.

New Fashions And Fabrics Are Easy To Dryclean

Denim jean sales are off and the aforementioned tight fabric ladies pants are in fashion. I for one am glad to see the denim girl’s pants style fall off. Denim skirts are back in style as are diagonally cut open front from thigh to knee asymmetrical design. Quite nice looking and easy to dryclean fabric skirts. These skirts have fabric of silk or leather and casually cascade across the knees. The latest word in the fashion industry is “display the legs for 2015.” Little concern is ever given to the cleanability of any garments that are in fashion but usually everything can be drycleaned, less the trim.

Dye Prints Are Not Stable For Drycleaning And Wetcleaning

Fur trimmed coats are staying with larger furs that are pretty drycleanable. Sparkly trimmed garments still have delicate features and gowns of delicate chiaroscuro and heavily sequining are fashionable this fall and next year also. There is a distinct relationship between design and the environment today, which is good. Textile technology is a popular art and many new materials are coming into use such as corn, bamboo and soy with full attention to biodegradable possibilities. Some of these factors are good for the drycleaning industry. Prints and dyes are least considered as far as drycleanability and the thought towards being biodegradable which translates to the drycleaner as “not serviceable.”

Even though blue jean sales of denim are off, denim remains a very popular fabric in other garments. Having started in 1873 in San Francisco by Levi Strauss, their sales are now off as much as 53%. Mostly because it is so expensive and other fabrics that are cheaper are also more comfortable. Man-made materials are rising in popularity as they did in the late 60s and early 70s when the drycleaning industry took a serious hit.

Donna Karan wrap denim skirts are still aspopular as they were in the 1960s, then as now, with knee-high boots. Very pleasing style for ladies to show off their lovely “gams.” Wrap around skirts with button down style are more popular now than tight pants and denim is far cooler to wear and very drycleanable and wetcleanable. Now called jeans, which down south we called “Blue Jeans” are still widely used by men and as with the ladies, demin jean style, they fade in wetcleaning and slightly in drycleaning. In fact, most customers want them drycleaned so they come out softer and don’t lose as much color. This is great because we would far rather dryclean things than wetclean or laundry them.

The French originally began making denim in the city of Nimes. Being a sturdy cotton fabric similar to cotton duck but unstable dyes. Spandex now dominates the fabric world and even at only 3% content, it is troublesome for the drycleaner, but comfortable for the consumer to wear. Standard denim weight that is considered light is 8 to 16 ounces per garment. Anything over 16 ounces is considered heavyweight which would include some skirts and lots of men’s blue jeans and jackets. Especially heavy workers’ garment wear and cowboys blue jeans.

Some may remember the bell bottom jeans of the late 1960s and early 1970s. I really liked them. I came out of the service in 1970 when they were popular and enjoyed wearing them. They lost favor by the mid 70s and returned in women’s wear briefly in the early 1990s. But they were not flared as they were in the 60s. The flare at the bottom of the pants (hence the term bell bottoms) were as much as 16 inches. Sailors wear bell bottom uniform pants too.

Well that’s enough history on denim and fashions for now. I hope everyone had nice holidays and enjoy a beautiful 2015, full of prosperity for your businesses.