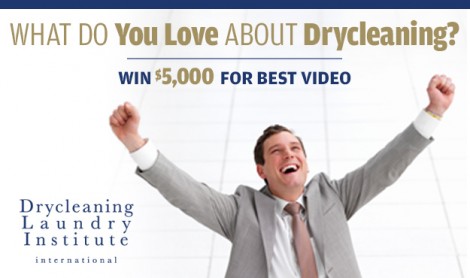 “I Feel Great When I Get My Clothes Drycleaned” features two well-dressed young men rapping, dancing, and extolling the benefits of having their clothes professionally cleaned by a member of the Drycleaning & Laundry Institute. The video won the $5,000 prize in DLI’s contest. The Magical World of Drycleaning took second place and #FreshPress took third. Each was awarded $100, though no official prize was listed in the contest rules.

In all, 23 entries were received from cleaning professionals, students and members of the general public. To qualify, each video logged at least 100 views. By April 30th, the videos had been viewed 23,868 times, and the number increases everyday.

“This program improves the image of our member drycleaners because it shows us as a modern service that is an important part of people’s lives and a necessary component to leading a happy and successful life,” said Dave Beatty, owner of Murrysville Cleaners in Murrysville, Pennsylvania and DLI’s District 2 Director, the creator of the contest idea.

“Several videos show younger people, who are an important part of the Internet and all the other social media,” Beatty said. “It shows people who make you feel very comfortable and you could easily think of them as your friends and neighbors. It is nicely done so that the videos are like your good friends sharing the secret of their success because they want you to do well also. This is so much more powerful than a businessperson saying, ‘Come to me for your drycleaning.’ ”

DLI members are encouraged to share and post the video as it specifically promotes professional cleaning by a member of the Institute:

“If you got a sweater they can clean it nice

They take the time and know what to do

Lyrics from: “I Feel Great When I Get My Clothes Drycleaned”

Entries were capped at two minutes and could not promote a specific business. The goal was to promote drycleaning services in general. DLI members voted on their favorite videos and DLI’s Board of Directors selected the winner from finalists suggested by the membership vote.

“Our members benefit from the video contest because all the entries will get thousands of views which will help to convince current and future customers that it is both important and will make them happy to use our services,” Beatty said. “It shows average people having a great time and being very happy with their local cleaners.”

Based on the success of this program, it is likely that DLI will run a similar contest in the future to continue to raise awareness of the benefits of drycleaning.

“The more cleaners who embrace these videos and put them on their websites, Facebook, Twitter, Pinterest and e-mails, etc., the more successful the program will become,” Beatty said. “We have more than 20 videos so everyone can find something they like and share.”

David Goehring, a professional videographer from Atlanta, Georgia, created the winning video. Goehring began making videos with his friend, Matt Austin, the suited gentleman in the video. “It quickly turned into a passion and eventually, a career,” Goehring said. “Now I’m a full time filmmaker and I’m fortunate enough to do lots of corporate commercial and short narrative film type work.”

Goehring produced the music in the video as well, saying, “I find that if you create your own music and try to make clever lyrics, you stand out from other people by default. So, I try to incorporate it when appropriate.”

Learning about the drycleaning process was fun, he said. “I certainly had to do a lot of research before making the video. What struck me is how the process is so streamlined and really delivers fantastic results, and also that there is actually some liquid involved.”

See the winning video and all the contestants at www.DLIonline.org/contest.

Learn more about The Drycleaning & Laundry Institute at DLIonline.org.